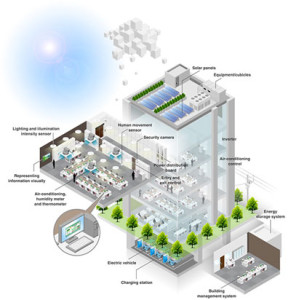 In an era of rapid technological progress, is there a reason that an office complex or classroom building—both housing lots of smart people—can’t elevate its own IQ?

In a smart building, software allows communications among traditionally separate systems running everything from lighting, heating and ventilation to security and telecommunications. The systems’ convergence creates a single intelligent network that allows a building to react dynamically to real-time conditions using input from every source attainable. Moreover, smart buildings are the backbone of smart work environments, something that tenants increasingly want.

“They are engineering smart buildings with automation, which facilitates the creation of smart work environments.” Bob Brown, chief executive and co-founder, Fremont-based Teladata LLC
Energy is typically the largest expense for any U.S. building owner or user, accounting for 30 percent of operating costs in an average commercial building, according to the U.S. Environmental Protection Agency. Overall, commercial and industrial buildings use $200 billion a year nationwide on power, producing nearly half of the nation’s greenhouse-gas emissions. Smart buildings are being credited with reducing energy use from 20 percent to 30 percent as compared to conventionally built and operated structures.

Read the rest of the story at The Registry – here.